It's Full Means It's Empty

A curious transport problem seems to evolve in this country as a result of the plentitude of cars.

So many people own cars that city buses in smaller towns like Winston-Salem, where bus services are not fed in by commuters' trains, seem to have lost much of their function—not so much as to be entirely dispensed with, but to become uneconomical to be run on an extensive and efficient scale.

So, by the time bus services find it impossible to survive the increasing use of cars they will have become a vital necessity for the smaller town.

Is there a way out of this impasse?

There seems to be one way out: A transport system that would have the main advantages of private cars— that is, be available at any time, any place, with sitting space.

In order to have these advantages, a transport system should,

a) not consist of buses, and,

b) not be a regular service.

It should, instad be a flexible system consisting of cabs running all over the town and its suburbs all the time, taking up to 5 passengers and charging each passenger a certain sum for a certain distance—a little over the present bus fares, if necessary.

When the driver knows, from his experience, that at certain hours of the day he has a good chance of picking up passengers on his route, then he need not wait at a stop until the cab is full before starting on a new errand. During the rest of the day he may choose to wait, if he doesn't want to take chances, till he gets 5 passengers, unless one or more of the passengers undertake to pay for the empty seats in case the driver fails to fill them up en route.

The advantages of such a transport system over a regular bus service would be:

1. It will have no problems corresponding to that of the buses which have to run with only 3 or 4 passengers on board at certain hours of the day.

2. These cabs will be on errand all the time so that passengers would not have to wait as much as they have to for buses.

3. They will be able to cover a much greater number of routes than buses.

4. They will provide a faster means of transport since they would not have to stop at every stop once they have five passengers on.

5. They will provide an inexpensive means of transport even at the late hours of the night.

6. Every passenger will have a seat.

Such a system should be supplementary to a regular bus service, co-existence of the two being not only possible but even inevitable, since, once this system is successful, it will reduce the number of people who use their own cars to go to work. As a result, there will be an increasing demand for an extensive transport system.

This idea is not a personal innovation of the writer.

Such a transport system already exists in the larger cities of Turkey, as well as between the cities, and has proved to be very efficient, although in Turkey it has evolved not out of the abundance but out of the scarcity of private cars.

These cabs in Turkey are called "dolmoush", meaning "it's full", and of course it may sound paradoxical to a stranger's ear to hear the driver of an empty cab calling out "It's full!" But since this system and the name "dolmoush" have evolved, "it's full" has come to mean "it's empty" in the transport terminology of Turkish. The queerness of the name, however, adds to its charm. 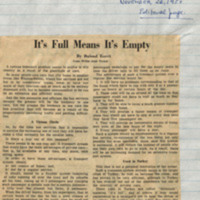 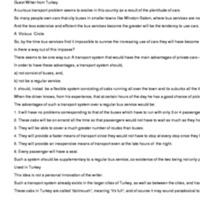