I think it would be a good idea to name favorite dishes, vegetables or birds after the nations of the world. That might help to establish better understanding among the nations, because no grateful person would think ill of a nation just after he has had a nice dinner with a dish called after that nation. The United Nations should give serious consideration to this matter.

The opposite may also be true, however, in extreme cases. The name of a certain nation could make a person so sick at the stomach at times that he might develop a strong distaste for any dish called after that nation.

So-called "Russian-salad," for instance, had been a favorite dish in Turkey for quite a long time. But when, soon after World War II, the Russians came out with their threats against Turkey, claiming the Straits, the Eastern provinces, the Northeastern provinces and what not, Turks began to eye Russian salad with suspicion.

It might have been the name or just the rotten eggs that some restaurants mixed into the salad, but it did begin to cause more and more stomach trouble. Restaurants began to lose on it. There was a danger that it might soon become as unpopular as any political traitor in Turkey.

Just at that time a bright idea occurred to some chefs. Taking note of the increasing popularity of the United States in Turkey after the Truman Doctrine, the Marshall Plan and NATO, they promptly changed the name of "Russian salad" to "American salad." Now this same old salad again tops the menus in fashionable restaurants and has even become more popular than it ever was under its old name.

I hope the same astro-political rule applies to the bird turkey, in this country, and that you have, at one time or other been reminded of the existence of an old country at the other end of the world after a nice turkey dinner.

So, the same sweet bird reminds the Turks as much of this country as it reminds the Americans of mine.

I hope you will all have a nice Thanksgiving dinner today and really enjoy your turkey so that you may think well of my country. 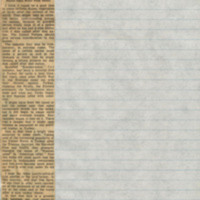 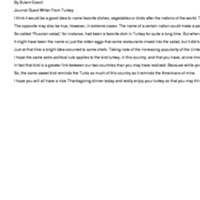