Ataturk: He Defied an Empire in the Name of Freedom

Lifted Turkey From Decay To Greatness

On May 19, 1919, Gen. Mustafa Kemal landed at the Black Sea port of Samsun. He was under orders of the last Sultan of the Ottoman Empire not to resist the Allied powers which had occupied a great part of Turkey at the end of World War I, leaving the Turks only a small territory in central Anatolia.

The Ottoman Empire had virtually come to an end but the Sultan was still anxious to remain on his throne in Istanbul.

Soon after he landed at Samsun, the young general made it known that he was not going to obey the orders of the Sultan. In fact, he himself was going to organize the national resistance against the occupation forces of Britain, France and Italy and the Greek armies which were advancing, with Allied support, towards the remaining free territory.

By making this decision, Mustafa Kemal, who was later to be re-named "Ataturk," (meaning the Father-Turk) by a grateful nation, began opening a new chapter in Turkish history.

He had served the Sultan as a successful commander on various fronts, and, had won the War of the Dardanelles against the Allies. But the victories of one commander could not save from death an old and decaying empire, engaged in wars on all its frontiers.

He knew that the end of the crumbling Ottoman Empire had come, and he decided to establish a new state on stronger foundations. But first, the freedom and independence of the Turkish nation had to be restored.

He went about this task in a democratic way, unprecedented for a nation which had always been ruled by an autocracy, and indeed unusual for any other country under occupation. He convened national congresses in various parts of free Anatolia and used, not force or threats, but his powers of persuasion.

He chose as his headquarters the small town of Ankara, which was later to become the capital, convened a freely elected National Assembly there, and let himself be criticized and opposed in this parliament while he was conducting what seemed to many a desperate war against too many odds: a young rebel general denounced by the head of his state, trying to create armies out of a worn-out people with no supplies, arms or ammunitions, to fight against the occupation forces of the victors of World War I.

This seemingly impossible task was accomplished within four years, and Turkey regained its freedom and full independence. When all the Allied forces had evacuated Turkish territory under their occupation, Mustafa Kemal declared the Republic in being on Oct. 29, 1923, thus bringing the Ottoman era to an end.

His slogan during the War of Liberation had been:

"There is no defensive line, but a defensive surface, and that surface is the whole motherland!"

In accordance with this slogan, he discarded the classical rules of warfare and strategy by letting the invading armies advance within a few miles of his headquarters in Ankara. The sounds of the guns could be heard from the Parliament building in which some of the deputies were in a rage over taking such a dangerous risk. Yet there the invading armies received the crushing blow and began to retreat faster than they had advanced, finally to be defeated on Aug. 30, 1922.

Once the victory was won and the new state established, Mustafa Kemal had a new slogan: "Peace at home, peace in the world!"

In an age when privates and corporals in other countries of Europe were promoting themselves to generals and generalissimos and putting on self-designed uniforms, Mustafa Kemal, by then a marshal and one of the greatest commanders in history, took off his uniform as soon as he was elected the first president of the Republic that he had founded. And he never wore it again, not even on official ceremonies or for military parades except on the one occasion when he received in audience the envoy of fascist Italy at a time when Mussolini was threatening Turkey. Nor did he ever again use his rightly earned military titles.

In keeping with the spirit of his new slogan, which identified the nation's security with world peace, and which was to turn the warlike Turks into a peaceful nation, Ataturk renounced all claims on the former territories of the Ottoman Empire, and the new boundaries of Turkey were declared final.

The statesman in Ataturk checked the ambitions of the commander; the reformer dictated the tasks of the statesman: and the philosopher formulated the motives and objectives of the reformer.

His Philosophy of History

Ataturk's philosophy of history may be said to derive from two assumptions: one, that man all over the world was the same in essence, the apparent differences being superficial and transitory; and two, that what is today called western civilization was a result of the migrations from the steppes of central Asia.

He claimed that the Turks had been at the core of this migratory movement and should therefore regard themselves as qualified to inherit it.

Commenting on Ataturk's historical theory in his "Civilization on Trial," historian Arnold Toynbee says that "it was a brilliant device for restoring the morale of his fellow-countrymen, but it was still a more brilliant, feat of genuine historical institution. For," he continues, "from the Fourth Century of the Christian era, when they pushed the last of their Indo-European-speaking predecessors off the Steppe, down to the Seventeenth Century...the Turkish-speaking peoples really were the keystone of the Asiatic arch from which the...civilizations hung suspended. During those 1,200 years, the overland link between separate civilizations was commanded by Turkish steppe-power, and, from their central position...the Turks rode out, conquering and to conquer, east and west and south and north: to Manchuria and Algeria, to the Ukraine and the Deacon."

In developing this theory, however, Ataturk did not intend to reduce world history to Turkish history. His intention was to enable the Turks to identify themselves with the common history of mankind instead of being tied up within the narrow confines of the Ottoman history which had reached a dead end.

In fact, his should best be defined as a "homocentric history," reducing the history of the nations to the history of man, rather than being deceived by the Turco-centric facade which, as Prof. Toynbee notes, was merely a device for "restoring the morale of his fellow-countrymen" after the discouraging experiment with the Oriental civilization of the Ottoman period. He wanted to uproot his nation from the barren soil of its recent past and transplant its roots to the wide expanse of human history. In other words, he wanted to develop in Turkey an anti-traditionalist and anti-sectionalist attitude towards history that would stimulate progress rather than hamper it.

It had obviously been Ataturk's belief that the relationship between the peoples who had migrated from Central Asia as well as those who had been pushed further west by these migrations had only been loosened as a result of the difficulties of communications; and that as these relationships and contacts were loosened, these peoples had cultivated nationalistic or regionalistic feelings. They had also begun to take pride in and foster the minor and superficial differences between religious, and to develop their newly acquired habits into rigid traditions.

Consequently, Ataturk based his radical reforms, which changed the outlook of the Turkish people almost overnight—turning them into an international-minded nation—on anti-traditionalism. He adopted the term "revolutionary" for his reform movement, in order to imply that even the new outlook and customs to be acquired should not necessarily be regarded as permanent. Thus he made a dynamic country out of Turkey, easily adaptable to new conditions and always anticipating future developments and changes.

Applying this historic theory to language, he even went so far as to claim that, since the psychological motives behind the birth of language should be the same all over the world, there ought to be a way of going back to the common initial basis of the languages in order to build up a new universal language on that basis.

But this proved to be too hard a task for the linguists to cope with, and after some years of strenuous efforts, he let them mainly concern themselves with research on the sources of the Turkish language with the aim of making Turkish a language in which there would be no difficulty in expressing new concepts.

Ataturk left nearly all his fortune to the Turkish historic and Linguistic Associations, two institutes which he had founded and actually guided in his lifetime, so that they could carry on with work on his historic linguistic theories, regardless of the different views that future administrations in Turkey might take on these subjects.

Attachment to an isolated past was, in Ataturk's view, mere vanity, a sign of weakness. He felt that it bred fear of the future and enmity towards other peoples and finally caused social stagnation and cultural impotence. A nation, he thought, should be brave enough to live the present without seeking support from its past, in order to be able to face and survive the future.

His interest in history was a non-attached and non-committal one, and was mainly aimed at making it serve as a basis of understanding and unification rather than as a factor of dissension among mankind. In order to be able to achieve this, he had to discard historical boundaries, for the world could not be unified in the future unless its history was unified.

All this may sound impossible, but it has worked in the case of Turkey. For the Turks have severed their ties with their nationalistic past to identify themselves with the history of all mankind, and now they can look up to the future with greater courage and self-reliance than ever before. 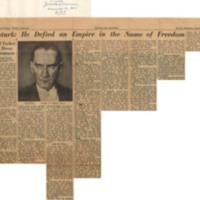 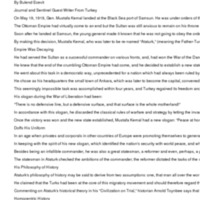