He Had a Nightmare - Turk Newsman Flunks a Test on...Turkey

By Bulend Ecevit
Journal and Sentinel Guest Writer From Turkey

As you Americans so often say: "I've had it."

I had the temerity to tell a group of Forsyth students that American children don't learn enough about other countries - especially since your nation occupies such an important place in the world.

So the other day the sixth grade at Rural Hall School invited me to spend all or part of a day with them. While I was there they took a test on Turkey.

I take back my criticism. They passed. I flunked.

At the end of the class I felt like apologizing to Mr. Bryce Gordon, who had heard me make my original remark at a City View School PTA meeting and had his Rural Hall sixth graders invite me to their class.

Why, his students could state four ways in which government was improving Turkey; they could list some of our rivers; name our five chief crops and four minerals, describe our climate, name our highest mountain and chief seaports - and they even knew that Constantinople isn't called Constantinople anymore. Well, I DID know that.

You know, whenever I'm sick I seem to be bothered by two recurrent nightmares. One has to do with huge loaves of bread growing our of proportion and giving me a sense of helplessness and insignificance. The other, which I understand a good deal better, finds me, a grownup, sitting at a tiny desk in an elementary school classroom. That makes me feel as out of place as Gulliver.

I really wouldn't have gotten into my "nightmare" this week at all if it hadn't been for that PTA meeting. A beautiful Swedish girl and I participated in a panel discussion. We were asked whether we had any criticisms of the American system of education.

Safely sheltered behind her charm, this young lady made all SORTS of criticisms, and nobody in the audience seemed to turn a hair. But when my turn came and I made one minor point - the one about your children not knowing enough about other countries - some people in the audience didn't seem to like it at all.

That's where Mr. Gordon heard me. And, as I said, I flunked. 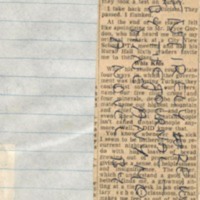 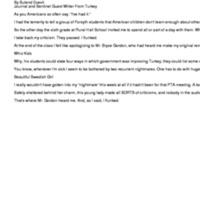