Yesterday was the 31st anniversary of the founding of the Turkish Republic. Bulend Ecevit, the Journal and Sentinel's guest writer from Turkey, describes here this significant event in the nation which holds the southeast flank of the West's defenses against Soviet Russia.

It took the Turks over a thousand years to settle down to a peaceful way of life.

They had been fighting continuously in their original homeland, the Central Asian plateaus, fighting on the routes of migration to the West, and finally fighting for six centuries in order to retain their adopted homeland, Anatolia, which is now known as Turkey.

This strip of land that joins Asia and Europe like a bridge had throughout ancient history been continuously trodden under the heels of numerous armies venturing from the east to the west and from the west to the east.

Civilizations flourished on its fertile soil, one after another, like seasonal flowers, only to be carried away by the gust of the passing armies to other less fertile lands, and their remnants sank deep into the earth, layer upon layer, turning Anatolia into a treasure house of historic relics and records. Traces of civilization ranging from the Sumerian, Hittite, Ancient Greek, and Roman to Early Christian, Byzantine and Islamic are still there to be seen.

From the beginning of recorded history to this very day, Anatolia has retained its great strategic value— too great for any one nation to live on it in peace and security without being exposed to the dangers of invasion at any time by others who wanted to expand their lands and to dominate the routes of trade.

Therefore the Turks themselves felt they had to expand their territories in order to retain Anatolia as their new homeland. They had to surround it with a security belt encircling part of the Black Sea, Messopotamia, Arabia, North Africa, and Eastern Europe as far as the gates of Vienna.

That the geo-political realities which had made such an extension imperative have not changed up to this day can clearly be seen from the substitute political arrangements that the Turks have been seeking during the last three decades in order to be able to live in peace and security in their homeland. They no longer have an empire, but instead, they have been trying to fortify their positions by joining the North Atlantic Treaty Organization, forming an alliance with Greece and Yugoslavia and another alliance with Pakistan.

What the Sword Could Not Do

Yesterday Turkey celebrated the 31st anniversary of the proclamation of the republic. For six centuries the Turks had been ruled by an autocratic regime in which the Sultan, or the emperor, had almost complete political, military and religious authority vested in himself.

The change that took place on October 29, 1923, was not a mere change of regime. This date also signifies the end of the Ottoman Empire and the birth of a new state which renounced all claims on the non-Turkish territories that formerly belonged to the Empire. And, even more important for the Turks, this date was the beginning of a new way of life.

By the end of the 17th century, the Turkish armies had advanced as far as Central Europe. A considerable part of Turkish territory, at that time, was in Europe. Yet Turkey was not then regarded as European power.

Today, Turkey has only a small piece of land left on the European conntinent, yet she now is regarded as a European power.

What could not be achieved with the sword in the past, has been achieved, within a few years, through a change in the outlook of the Turkish people.

The War of Liberation

Religious fanaticism and a strict adherence to Islamic culture, as a result of the Sultan’s position as the head of the Mohammedan world, had secluded the Turks from Western civilization and culture even at a time when they ruled over a great part of Europe, and their social advancement and technical progress were hampered as a result of continuous wars and the heavy burden of a vast empire.

The Ottoman Empire was virtually dead by the end of World War I. The Allied powers had occupied a great part of Turkey, leaving the Turks only a small piece of land in the barren parts of central Anatolia. Greek armies, supported by the Allies, had landed in Izmir, on the Agean border, and were advancing inland to occupy even the little territory left to the Turks.

The last Sultan, still sitting on his throne in Istanbul, was too helpless to reject foreign domination. He therefore commissioned a young general, Mustafa Kemal (later to be named "Ataturk," meaning the "Father-Turk," by his people), who had won great fame by repulsing the British at the Dardanelles, to go to central Anatolia and prevent any Turkish resistance to the occupation armies.

Mustaf Kemal landed In Samsun, a small Black Sea port, on May 19, 1919, and immediately declared his intention to do just the opposite of the Sultan's orders. He lost no time in forming a nationalist army and starting a war of liberation.

Of course the Sultan denounced him, but that made no difference. Within three years the nationalist army of Mustafa Kemal had defeated the invading armies, and forced the occupation forces of Britain, France and Italy to withdraw.

This military victory was later sanctioned at the Lausanne Conference in 1923 where the chief Turkish delegate General Ismet (Inonu) achieved a diplomatic victory by obtaining a treaty from the victors of World War I restoring full independence and sovereignty to Turkey.

This was followed by the proclamation of the republic on October 29 of the same year.

Ataturk realized, however, that these military and diplomatic victories alone would not ensure Turkey's survival as an independent and sovereign state. Turkey would have to abandon all her outdated institutions and adopt the way of life, the outlook, the culture and civilization of the western world, in order to keep pace with the scientific and technical advancement of the age.

Consequently, Ataturk initiated a series of radical reforms which changed the face of Turkey almost overnight.

As a result of these reforms, Turkish society, which had remained static for centuries, acquired an unexpected dynamism, and the Turks were almost able to catch up with the progressive nations of the world within as short a time as 10 to 15 years.

A list of the major reforms initiated by Ataturk should give a clearer idea of the extent of the change that was achieved in Turkey:

In 1924, the Caliphate was abolished, as a result of which Turkey, of her own will, relinquished her position as the head of the Islamic world.

A new constitution was adopted in the same year, based on the concept of the soverignty of the people.

In 1925, the wearing of the fez was forbidden and the European headgear was imposed.

In 1925, the Western calendar was accepted.

In 1928, the State was secularized by deleting from the Constitution the paragraph stating that the official religion of the state was Islam.

Again in 1928, a new Latin script was adopted to replace the Arabic script which had been superimposed on the Turkish language, although Turkish had no relationship with Arabic. Western numerals also were adopted.

In 1931, the metric system of weights and measures was accepted.

In 1934, women were given the right to vote and be elected.

In the same year a law was passed introducing surnames to Turkey for the first time.

In 1935, Sunday became the weekly holiday instead of the Islamic Friday.

End of the One-Party Regime

Ataturk's methods might have been described as dictatorial had it not been for the fact that even the revolutionary regime that he set up in Ankara, the new capital of Turkey, during the War of Liberation, was much more democratic than the Sultan's regime in Istanbul had ever been. This new revolutionary regime had a freely elected parliament which would, at times, severely criticize and question Mustafa Kemal (Ataturk) in his capacity both as the head of the state and the commander-in-chief of the fighting armies of liberation.

It is true, however, that after the republic was proclaimed, Ataturk felt it necessary to check the freedom of the people to a certain extent because of the presence of reactionary elements, especially among the Moslem clergy, who were against all kinds of reform. That phase of the republican period in modern Turkish history is generally referred to by Western observers as a "benevolent dictatorship." But it would be more correct to describe it as a dictatorship to end dictatorship.

Indeed, Ataturk made it clear that he intended his people to enjoy a fully democratic way of life as soon as the reforms that he had initiated were assimilated.

He died in 1938 and was succeeded by Ismet Inonu as President. Apart from his military and diplomatic achievements during the War of Liberation, Inonu had also been Ataturk’s Prime Minister for several years.

He led his country safely out of the maze of World War II, and, as soon as the war was over, announced his decision to establish true democracy in Turkey. He allowed other political parties to be formed besides the People’s Republican Party which had ruled the country with a one-party regime from the beginning of the republic, and introduced elections based on universal suffrage.

A strong opposition party was then formed by Celal Bayar, who had also been Ataturk's Prime Minister for some time, and who had previously served in Inonu's cabinets as a successful Minister of Economy.

This transition from an authoritarian one-party regime to a democratic multi-party regime by the desire and will of a head of state who was securely in power was unique in history.

It is too early yet, however, to evaluate the results of this unique experiment in willfull transitition to democracy, as it is yet to be seen whether the politicians who took over from the initiators of the democratic regime in Turkey will fully adhere to the basic principles of this regime and whether they will be able to check the influence of the reactionary elements who have been trying to take advantage of the newly gained liberties to undo some of Ataturk’s reforms.

Once More the Bridge

Yet now, as the Turkish nation celebrates the 31st anniversary of her phoenix-like rebirth out of the ashes of an old empire, Turkey is already among the progressive nations of the free world.

The gates of the bridge joining Asia and Europe have ence more been opened to the West after remaining closed for six centuries under Ottoman rule, and Anatolia has thus resumed its functions as a link between the East and the West. 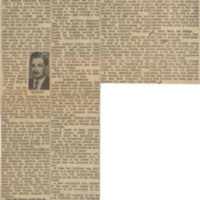 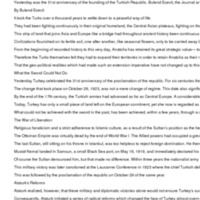