Bulend Ecevit, a newspaperman of Turkey who is spending three months in Winston-Salem as a guest writer for the Journal and Sentinel, gives here his impressions of last night's Democratic rally at Kernersville—and compares it with political rallies in Turkey.

Miss Marjorie Hunter of the Journal took me to the Democratic rally at Kernersville last night, and I am grateful to her for that.

Firstly because I would have been ashamed to go back and tell the folks at home that I had been in the United States during election period and never seen a political rally. They would never have forgiven me, for, at my home town Ankara, which is the capital of Turkey, people talk nothing but politics.

I was also grateful because I would have been equally ashamed to go back and tell my American friends in Ankara that I had lived in the South for three months and had never tasted barbeque. Yes Sir, that is a fact! I have been in the South for almost three weeks now and had never tasted bar-b-q (I have got it right this time) until I had been to that rally at Kernersville.

And I was mighty glad (doing my best to master Southern American) to hear the hillybilly music that I had heard so much about. Some of it reminded me of our own folk music.

I was also glad that I have had a chance to listen to the fine speech made by Rep. Chatham, with whom I have had a great deal to talk about since he had been to my country several times.

What particularly impressed me in his speech was that he would spare so much of his time to talking on world affairs. People abroad still think that Americans do not care about world affairs. Yet Rep. Chatham has very clearly shown that world affairs were nothing less than home affairs for Americans these days since they had undertaken so much responsibility on their shoulders for the well-being of mankind and the security of the Free World.

One thing I didn’t like about the Democratic rally at Kernersville, though, was that the audience consisted of Democrats alone. Now, that is the wrong policy. It is like carrying coals to Newcastle. I think the Democrats ought to speak at Republican rallies instead, and vice versa. Then you can get a really spirited rally. And I thing political rallies ought to be spirited. Coming from a Mediterranean country, I personally don't care so much for rallies without any fist-fighting or shouting. We usually send our police reporters to political rallies at home, because they would usually have more to cover.

I shall have to tell our politicians when I go back about the hillybilly music though. They haven't thought of that yet in Turkey. I think it is a good idea to have some music before the speech-making.

I thought about the bar-b-q too, but that would not be practical for Turkey, for our parties would not be able to afford it. There is only one politician in Turkey who goes in for that sort of thing and gives feasts to hundreds of voters before each election. But then, he is a very rich man. So rich in fact that he can afford supporting a political party all by himself. And, mind you, a party with almost a dozen members—all of them clerks at his factory. 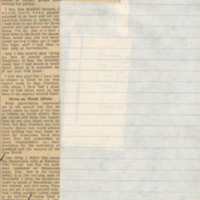 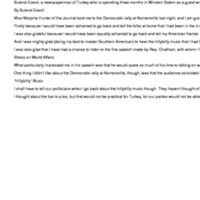