Istanbul - A Beautiful City of Many Names, Haunted by Its Long, Hectic Past

Guest Writer From Turkey
MANY PEOPLE in this country probably remember from their school days, the strange—

A woman I have met here tells me that American school children once had to memorize these rhymes in order to learn the correct way of spelling and pronouncing the Impossible name of “Constantinople" — only to find out one day that Constantinople was not to be called Constantinople after all. But,

“Why did Constantinople get the works?”
a popular American song rightly asks, and provides a fair answer: “That's nobody's business but the Turks'!”

Even a Turk has to admit though that it was unfair to turn the efforts of generations of American school children for learning the correct way of spelling Constantinople into a waste of time.

But so many things have changed in Turkey during the last three decades that only a miracle could have saved the charming yet clumsy name of Constantinople from being changed into something less clumsy.

Actually there was not much of a change involved for the Turks themselves, for they nearly always called the city Istanbul. And there was nothing chauvinistic about the change either, because the name "Istanbul" was as Greek to them as "Constantinople." Perhaps the Turks just didn't want their children to be bothered with a crowd of people like Mr. C.'s and Mr. O.’s, Mr. Nople’s and Mr. Pople's while trying to learn the name of their biggest city.

And what difference does a name make after all, except, as the American song says, you have to keep in mind that

“If you have a date in Constantinople
Then you need be in Istanbul."

And that, of course, is quite easy to do— so long as you have the date.

THE FACT IS, Istanbul has always been a city of several names.

It was first called Byzantium, when a Greek leader named Byzas, from Megara, first founded it as a small town on the European side of the Bosphorus, in 658 B.C. That was more than 25 centuries ago—long before Constantine was born, or the Turks appeared in Europe, or children in this continent heard about Mr. Nople and Mr. Pople.

At that time it was also referred to as "Nova Roma" (the New Rome).

"Istanbul," which is its official name now, may have emerged at any time during centuries when this city was the city of the wrorld which everyone wanted to visit, because "Istanbul" is a slightly distorted form of the Greek word meaning "to the city."

According to the Encyclopedia Brittanica:

"In respect of influence ever the course of human affairs, its only rivals are Athens, Rome and Jerusalem. Yet even the gifts of these rivals to the cause of civilization often bear the image and superscription of Constantinople upon them. Roman law, Greek literature, the theology of the Christian church, for example, are intimately associated with the history of Constantinople." No wonder that people once referred to it simply as "The City."

THE CITY” has had an adventurous life.

In ancient history it was captured and ransacked by the armies of various Greek states and of Darius, the powerful Persian King. Among the numerous tribes and armies that attacked, threatened or ransacked the city in later centuries were the Avars, the Saracens, the Bulgarians and the Crusaders.

It was finally captured by the Turks during the Ottoman period, and, except for a brief occupation by foreign troops at the end of World War I, has ever since remained in Turkish hands.

More damage was done to the architectural monuments and the works of art of Constantinople by the brothers-in-religion of its Christian rulers, than by the Turks, who were not Christians.

The Turks laid siege to Constantinople several times during the Ottoman period. The siege of 1453 ended in the city's capture, also bringing to an end the crumbling Byzantine Empire which, by that time, had been reduced to that city.

Constantinople, during that siege, was a strong fortress, and its last Byzantine ruler who, by coincidence, was the namesake of its founder, Constantine, fought bravely to defend it.

But the Turkish Emperor Mehmed II's strategy was too ingenious for him.

Between the Ottoman armies and the walls of Constantinople was a narrow inlet called the Golden Horn. The entrance to that inlet at the Sea of Marmara had been rendered impenetrable, having been sealed off by heavy chains and the strong fleet of the Venetians which had come to the city's rescue.

Unless the vessels could be made to travel across that 10-mile stretch of land, there was no hope of conquering Constantinople.

That is precisely what Mehmed II, the 23-year-old Sultan of the Ottoman Turks, did. He ordered solid planks to be laid across that stretch of land. The planks were oiled with fat of sheep and oxen. Then one dark night, 80 galleys and brigantines were pulled over these planks of wood from the Bosphorus to the Golden Horn.

The Sultan himself was on the northern shore, directing the final stage of the siege, seated on his white horse.

MEHMED II, who was to go down in history as Mehmed the Conqueror, was a liberal-minded young intellectual, an admirer of the newly emerging Renaissance art, and a great poet.

To him, the conquest of Istanbul was more than a military victory. He was conscious of the rich cultural inheritance that awaited him within the walls of that ancient and beautiful city. He punished by death any of his soldiers who laid hands on the art treasures, and one of his first acts when he entered the city walls was to give official recognition to the Archbishop of the Greek Orthodox Church.

To this day Istanbul has remained the See of that Church.

The greatest pride of Istanbul at that time was Santa Sophia, the famous Byzantine Church, which was to exert a great influence on Turkish religious architecture.

In this church were some of the finest mosaics that Byzantine artists had executed, depicting scenes from the Bible.

Yet the representation of human form was forbidden by the Mohammedan religion. So, the new rulers of the city, who were of Mohammedan faith, had no choice but to destroy them.

Could Mehmed the Conqueror, the liberal Sultan who was later to bring over the famous Italian artist Bellini to his court to do his portrait, allow such an act?

For nearly five centuries the whole world believed that he did!

But, a few years after Turkey became a secular republic in the first half of this century and restoration work was started in Santa Sophia, which was to be turned into a museum, it was discovered that Mehmed the Conqueror had only had those mosaics covered with sheets of durable cloth, upon which thin layers of plaster had been applied.

So, when the plaster and the sheets of cloth were removed, the mosaics were there —as fresh as they were in 1453.

Today Istanbul is a living museum of more than 25 centuries of history and art—the history and art of peoples of diverse cultures, religions and races strangely mixed together. They have left more than material imprints on that city; they have permeated its atmosphere.

Anyone who stays there long enough to get into this atmosphere becomes one with the past of the city and loses his sense of time. The city’s past becomes for him the present— a continuous present in which every moment has lasted for 25 centuries.

In a sense, Istanbul has never been conquered. It has always conquered the conquerors.

Only one man has been strong enough to escape the spell of this city, thus evading a fatal surrender within its ancient walls. And that man was Ataturk, the founder of the new Turkish Republic.

After he saved Istanbul from the victors of World War I, he chose to stay away from it, and set up a new capital city for the Turks in the barren parts of Anatolia, where the foundations of a new future could safely be laid.

Had Ataturk given in to the temptation of retaining Istanbul as the capital of Turkey, his reforms, which introduced the Turks to an entirely new way of life, probably would not have survived. The past, the feeling of the past, in Istanbul is, and has always been, too overwhelming.

It is a beautiful city, extending over the continents of Asia and Europe which are divided by the narrow Strait of Bosphorus.

It is an inspiring, tempting, and dominating city—a city with an unfailing spell.

A city that miraculously keeps on flourishing and maturing in its seemingly decadent way. 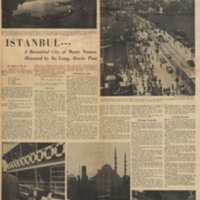 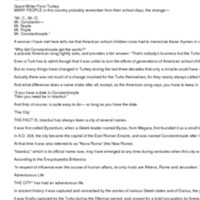