At the Helikon Gallery, at 25 Mithat Paşa Street, Yenişehir, works of a modem Turkish artist, Ferruh Başaga, are on view.

I think it is the first time that we are having a Yugoslav art exhibition in Turkey. The Yugoslavs have a rich tradition of painting, dating back to the Middle Ages. Works produced in Yugoslavia until recntly, have remained, as far as can be judged from the reproductions that one comes across, up to the standard of this tradition, within the concept of academic art.

Our limited knowledge of this past and our curiosity about the artistic products of an experimental new regime in a vigorous old country, justified us in expecting a great deal from the exhibition of modern Yugoslav painting. Yet it is, as a rule, unfair to expecta great deal, since it is bound to result in decreasing our power of appreciation.

That, perhaps, is what happened in the case of the Yugoslav exhibition.

The introduction to the catalogue in French starts with the statement that "la peinture Yougoslave n’est pas issu de l’influence intellectuelle apporté d’étranger".

The paintings on view do not give much support to this statement. It is obvious that modern Yugoslav painters are strongly influenced by the French impressionists in general, - particularly by Bonnard, Utrillo, Cezanne and Van Gogh. Bonnard’s influence is predominant.

Painters in all the occidental countries are, more or less, influenced by modern French art; and, since arts, in our day, are becoming more and more universal, there should be no harm in acknowledging this influence.

Among the 36 painters whose works are on view, Milosavljevic Predrag is, I think, the most interesting. He has individuality, a brave brush-work, and, what one is tempted to call an hysterical empathy for nature, which brings his landscapes close to surrealism


to remain a realist. Although he avoids colour -contrasts, except, perhaps, in "Earthquake in Dubrovnik", he is never monotonous,- the intensity of this colours making up for his limited choice of them.

Modern art has become so universal in our day that to have one painter like Milosavljevic Predrag who can display individuality, in an exhibition of works by 38 artists, should be considered quite an achivement for any nation.

Ferruh Başaga, at the Helikon Gallery, confronts us with various conflicting styles. Yet all these styles have, apparently, had their part in paving the way for the artist’s non-figurative period, in which he has shown considerable success. He is modernistic without being ambitious, so that, although his canvasses are not, perhaps, striking, he is nearly always on sure grounds.

It looks as if more children’s painting exhibitions are being held in Turkey, recently, than exhibit!ons by professional artists.

Apparently we are having more; and more progressive drawing teachers in schools. Nearly in all these exhibitions, the children display familiarity with the works of the Impressionists, through reproductions,- and a freedom of interpretation, - wholesome in the sense that this freedom does not result in a predominance of child fantasy on the canvasses. The freedom of interpretation of these little masters and their natural escapes into fantasy are checked and balanced with a precocious respect for art and a realistic approach to nature.

This generalization applies to the exhibition of water-colours and drawings by the students of the Ayşe Abla Primary School. Their landscapes are particularly successful. 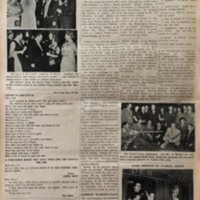 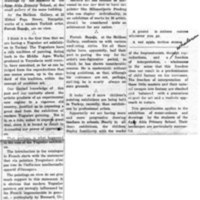 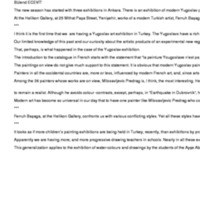