By Our Art Editor:

Bedri Rahmi and his wife Eren Eyüboglu have, for some time, been among the most successful painters of Turkey.

Bedri Rahmi Eyüboğlu has a mixed career as a painter and poet. He once wrote of himself that in the literary circles they referred to him as a good painter but a minor poet, whereas in the artistic circles he was regarded as a good poet but an unsuccessful painter.

The truth about him would be reached if the favorable halves of both statements were brought together. In literary and artistic circles alike, he is regarded both as a good poet and a good painter.

In fact, you cannot find much difference, in spirit or in style, between his poetry and painting.

His paintings usually, full of poetic feeling and perception, while in his poems the verses are so full of colour that they read as if they had sprung out of a rich palette.

Folk themes constitute one of the common factors in Bedri Rahmi’s poetry and painting.

Both his and Eren Eyuboğlu’s paintings remained, for some time, under the influence of Raoul Dufy. But very little trace of this influence can now be found in their canvasses, -excepting their occasional resort to the, technique of detaching the colour surfaces from the border lines.

With the decrease of the Dufy influence, Eren and Bedri Rahmi Eyüboğlu have begun to follow different and, at times, opposing courses.

Later, Eren Eyüboğlu was also attracted to the non-figurative tendencies in modern painting, which she succesfully adapted to the designs of the old Turkish calligraphy. At her best, her style oscillates getween a moderately cubistic and non-figurative art.

In the current Eyüboğlu Exhibition at the Helikon Gallery, she has some very successful canvasses in this style. However, the greater number of her works in this exhibition are attempts at capturing the unpretentious charm of the peasants, and examples of virtosity in lines and colours, rather than attempts into the problems of space and volume. In them has made full use of her sensitive approach to human beings and of her technical skill, to delight the eyes and the senses.

Bedri Rahmi Eyüboğlu's canvasses provide most interesting examples of his attempts at interpreting and deciphering the abstract designs of the Turkish "yazma"s (hand-printed cloth) and "kilim"s. These attempts now seem to have led him to the sources of primitive art, as a result of which his "yazma"s have acquired greater depth and, I think, a more universal apeeal than ever.

Apart from paintings and "yazma"s, the artists also have a variety of litographs on sale in the exhibition 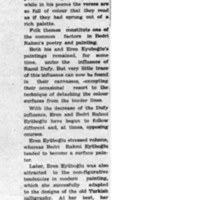 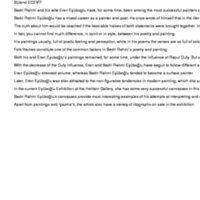