By our Art Editor

A pitcher by Hakkı İzzet, representing a bird. It provides an example of the plain and graceful contours that the artist successfully uses in his works. Hakkı İzzet largely derives his inspiration from the Hittites, but a small number of his works bear the influence of Ottoman art, as in the vase pictured above.

During the Hittite, Greek and Roman eras, and, before the Hittites, during the lesser known, bronze age, Anatolia was a centre of sculpture.

This art had developed here in almost all directions : Religious, representational, abstract and utilitarian...

The Hittite period contains all these tendencies. Through the medium of ceramics, the Hittites had endowed representational sculpture with a utilitarian character, as one can see from the cups, decanters, jugs, and various other objects the purpose of which are not clear to us but which might become very handy in our day as ash trays or bowls.

During the Hittite period, sculpture was highly stylized, simple and impressive lines dominating the figures in a way that stressed their earthliness.

When such a style is applied to earthenware it becomes even more impressive - it matches the material used in these wares, which is plain earth.

Hakkı İzzet, who is the Head of the Ceramics Department of the Institute of Chemical Crafts, and an authority on the ceramic art of Anatolia from its earliest days, has revived several of the characteristics of the Hittite ceramics and sculpture in his own works, which are now exhibited at the Helikon Gallery.

He has been very sucessful in developing, out of these characteristics, a style of his own which conforms with the general concept of modem art.

In his ceramics he sometimes carries simplification of lines even further than the Hittites. The animal figures represented in his pottery are stylized yet very expressive. Out of the plain and graceful contours of these works he achieves a sound harmony. His colours are also plain and grave.

These elements combine to give one the feeling that it is very short distance from Hakkı İzzet's highly developed art to earth, —and this illusion, I think, should be regarded as a test of success in ceramic art. 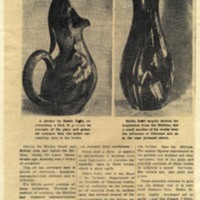 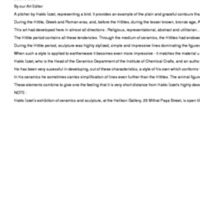