“SOUVENİR”, by Fikret Otyam, one of the group called “the Tens”, whose works are exhibited at the Helikon Gallery.

İhsan Cemal Karaburçak became a professional artist at a mature age. He has been holding one man shows in Ankara for the last three years. His new exhibition is now on at the Faculty of Languages.

He is one of the few Turkish painters whose work is strictly individual. He works out his own way within the conception of modern art.

Absence of light is one of the distinguishing features of his work. He cannot even be said to use a neutral light; it is a neutral lightlessness that pervades his canvasses.

As a result of this, shade also does not exist in Karaburçak’s paintings; and colours, and impacts of colours on forms, are not evaluated through light.

His colours, therefore, may be described as abstract colours, thus bringing Karaburçak’s paintings into the category of abstract art.

Colour plays the most important part in Karaburçak’s art. Although in some of his works he uses line for bordering the forms (e.g., in canvasses 2, 9, 11, 22, 35), and in some for adding movement to the composition (canvasses 3 and 10), these may be regarded as exceptions. Karaburçak does not yet seem to have decided what part, if any, lines are to play in his works.

But he has achieved complete mastery over colour. And, since he does not use it as a decorative element, hip dependence on colour does deprive his canvasses of depth, either in feeling or in execution. He is not interested in using pure colours.

Karaburçak’s is not a world of earth, air, water and fire, or of atoms, - it is a world made up of colours. In his paintings all beings and all the order of life seem to be born out of colour.

It would not be exaggerating to say that his current exhibition is among the most successful that have ever been held in this country.

At the Helikon Gallery, 25 Mithat Paşa Street, there is the exhibition of a group called “the Tens” (“Onlar Grupu”). The group had first named itself “the Tens” when it was first formed, a few years ago, by 10 young painters, graduates of the Academy of Fine Arts in Istanbul. In spite of its name, the group now consists of about 20 painters. Some of them, particularly Adnan Varınca, İlhan Ugan, Cafer Yazdıran and Turan Erol, are among the best painters of the younger generation in Turkey. In general, they tend towards abstraction, although few of them go to extremes in that direction.

They almost all share a strong sense of composition. A small number of them who try to retain some local colour in their canvasses seem to be under the influence of Bedri Rahmi Eyüboğlu, and more than ten of the Tens can be regarded as among the most successful interpreters in Turkey of modern trends in Western art. 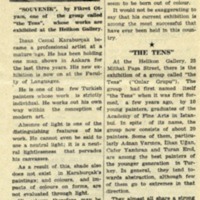 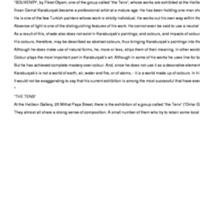