Those who have migrated to America, this land of pioneers, must have had at least one common characteristic, - they were all prepared to cut off their ties with their native lands and their traditions.

Yet folk arts are rooted deep in the soil of individual countries or regions and closely related to traditions.

Therefore, it could not have been expected of men who could break away with their traditions to continue the folk arts of their native lands, while engaged in a hard struggle for existence under different conditions of life in an overseas country.

However, a new folk art was bound to evolve with the emergence in time, of a homogenous nation.

Obviously, the new comers were little, if atall, influenced by the natives of America; so, this new folk art could hardly be expected to have anything in common with the art of the Indians.

The American of today, has a tendency for simplicity and clarity of lines, in the fields of painting, industry, architecture, furniture, and clothing,—with the exception of those fancy neckties and shirts.

The over-crowded patterns of the folk arts of most countries have become scarcer in America and the objects and animals that had been developed, through centuries, into stylized symbols, have become abstract forms.

The ultimate aim of colour harmony, in American handicrafts, seems to be the arrangement of large patters of colour in the most refreshing way; and, what are sought in linear harmony are the most concise modes of expression.

The folk art of the United States, as far as one can judge from the current exhibition of American Handicrafts at the Faculty of Letters in Ankara, is characterized by a search for the simplest formulas of proportion between colours, lines and forms.

The attemps at standardizing handicrafts through community projects, in America, seems to have expedited, even if in an artifical way, the development of these works into a folk art. 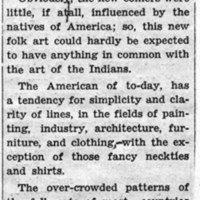 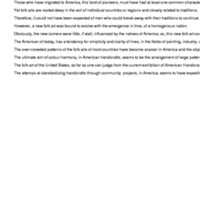