Although Mrs. Füreyya Kılıç took up fine arts only a few years ago, it is obvious from her work that she is a born artist. In fact, she was born into a family of artists, which include among its higly talented members such painters as Princess Fahrünnisa Zeid and Nejad, who are of international repute, Aliye Berger, a painter of great personality, and the 'Halikarnas Balıkçısı' (the Fisherman of Halicarnassus), a great writer.

Füreyya Kılıç had first exhibited her work in Paris. Her second exhibition was held at the Maya Gallery in İstanbul, two years ago, and she is now holding her third exhibition of tiles, gouaches and litographs at tho Helikon Gallery at 25 Mithat Pasha Street.

These might well have been the titles of some exotic poems. Yet they are the subjects of some of Füreyya Kılıç's tiles, gouaches, and litographs. They faithfully reflect the nature of her work, which is full of poetic feeling and interpetation.

Although she is not a surrealist, her treatment of the subject matter is irrational at times. Hers is a poetic irrationalism. It is not forced like that of most surrealists.

Füreyya Kılıç should be ranked with the expressionists, if her work has to be placed at all.

As an art critic, I would unwillingly hesitate to define her work as ‘symbolistic’, since that term has come to mean philosophical symbolism when used for the art of painting. But if her colours and forms could have been translated into verses, a literary critic would not have hesitated to rank her with the symbolists.

Some of her work is abstract in treatment. But, obviously abstraction not an aim for the artist. It is only a means, and she does not seem to mind reproducing the nature faithfully when abstraction as a means falls short of her purpose.

The distinction that normally exists between abstract and realistic art does not apply to her work. Her indifference to the outward appearance of objects cancels that distinction. Abstractionism and realism have no import on the work of Füreyya Kılıç. counts in her work is the meaning of the objects as reflected in the artist’s mind.

The hand-work and the mechanical work required for producing the tiles, the tile-panels, the tables and the ceramic vases and plates of Füreyya Kılıç might have easily resulted in a pre-dominance of craftsmanship in her art.

Her craftsmanship, on the other hand, is perfect,-too perfect to be assertive. It silently submits to her creative function like a good tool. 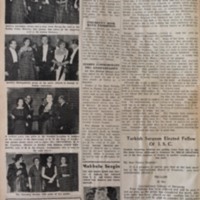 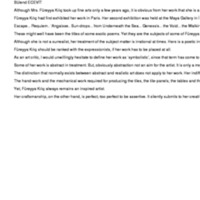