The “HELIKON” Art Society, recently founded in Ankara with the purpose of following and propogating contemporary art movements through the media of exhibitions, cinema shows, concerts and lectures, has opened its Gallery, at 25 Mithat Paşa Street, Yenişehir, with an exhibition by the 10 years old Turkish artist Hasan Kaptan, who already enjoys a universal reputation.

This is Hasan’s foruth exhibition in Turkey. He has been painting, for the last four years. He also had succesful exhibitions in Paris, and, recently, in New York. He will soon have another one in Mexico.

The art critiques in Europe and America have either recognized a precocious talent in him, or, going even further then that, have . regarded him as a mature artist whose, age could no more be of any account.

Every time I have seen Hasan’s, new pictures, since he was eight years old, I have been finding it hard to expect any further progress from this Child artist. Yet Hasan has always given the best proof to the fact that there can be no limits either for Man of for Art. In every new picture that he did, I have found Hasan beyond the limit that my power of imagination had drawn.

The subject of children’s painting has recently been taken into hand under a new light by educationalists, psychologists and aestheticians, allmost everywhere in the World, and the art education of children in comparatively progressive schools has been given a new direction. The results of this new impetus show certain common characteristics in children’s painting.

Yet these characteristics cannot be found in Hasan Kaptan's work. Some of them might have existed in his earlier paintings, but now, they do hot exist at all.

Hasan Kaptan cannot anymore be regarded as a child painter.

A never failing sense of colour, balance and composition has always distinguished his work. I have already admitted that there was no boundry for Man and for Art. Yet, probably because these elements -the elements of colour, balance and composition - are limited with the laws of physics and geometry, Hasan, had already reached the limit in these respects.

He has been advancing as a creative artist, on the strong foundation that his innate power of balance and composition and of colour harmony had set up.

Apart from the subject of human beeings, which over dominated his earlier works, Hasan seems now to have developed an interest for interiors and sea scapes as well.

Someone asked him why he had painted the sea in pink, in one of his seascapes. And Hasan replied: “I do not have to paint it in blue, just because God did so!” A more candid explanation could not be given of the artist’s relation with nature. Both God and the artist are creators. The difference between them is that the artist borrows from God the basic elements of the Universe, and, with them, creates a universe of his own. Colours, and the forces and laws that bind the objects, are among the basic elements of the Universe the capital “U”. They are the elements that the artist borrows. The pink as well as the blue, among them. In replacing the blue with the pink, the artist does nothing more than exercising the right recognized to him by the Universe.

Hasan has always given the greatest place in his canvasses, to human beings; in that he has gone further than any other Turkish artist. When he was only six or seven years old, he would scold, in his polite way, older painters of reputation whom he knew, for not dealing with the subject of Man in all their works.

Human beings, in Hasan’s recent works, are passing through a transition period smilar to that between the arts of the Middle Ages and the Renaissance: They are becoming more alive andtangible; they are coming down to earth; they are coming out from a world of imagination to the world of reality.

At this stage, Hasan happens to have removed a curtain and discovered the window of the human soul. He discovered the eyes!. And now, this great little man, who has always felt deeply for humanity, cannot leave these windows.

Eyes are everywhere on most of his new canvases. Eyes looking and eyes looked into; some discreetly parted; some, giving all secrets away; and some are closed, keepink silent.

Hasan has also tricks with eyes: He has painted a woman juggler with two pairs of eyes; and her child looks u with one eye, and looks down with the other.

A visitor to the exhibition asked Hasan: "Why are these eyes so unusual?" and he answered; "Well, they are jugglers; you can expect anything from them!" 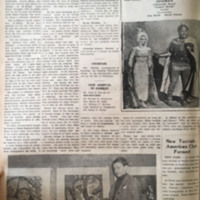 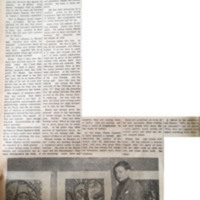 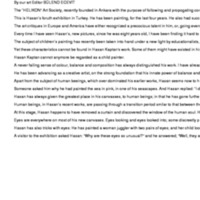