An “Exhibition of Heroic Paintings”, organized by the Public Relations Office of the Ministry of National Defence, is now on view at the picture gallery of the “Dil ve Tarih-Coğrafya Fakültesi” (Faculty of Languages, History and Georgraphy).

All painters had been invited to take part in this exhibiton.

It might have been expected that restricting the subject to heroism would be a limitation from an artistic point of view. In this case, however, it has proved to be of great advantage.

Western painting was introduced to Turkey in the beginning of nineteenth century, when the age of big canvasses and ambitious comspositions in European art was, more or less, over. Painters were beginning to probe, more than ever, into the nature of objects, colours and light; and they were becoming more interested in psychological and physical analysis and philosophical contemplation than religious, mythological and epic stories. However, they always remained conscious, sometimes inspite of themselves, of the traditions of European art among which composition on a three-dimensional plane occupied an important place.

Turkish painters, on the other hand, who had not inherited these traditions, let themselves into the torrents of modern art unarmed with that sense of three-dimensional composition.

As a result, lack of balance and architectonic construction nearly always made itself felt in Turkish painting.

The Exhibition of Heroic Paintings has provided the Turkish painters with an incentive to paint pictures in which composition played an important part, since they would have to handle, on their canvasses, large crowds in action.

They were also compelled to use their imagination which, upto then, had seldom been resorted to.

The results are amazingly good. Although there are a number of paintings of intolerably poor quality, a great many painters seem to have taken the chance offered by the Exhibition for attempts at intricate and imaginative compositions, on probably a more ambitious scale than ever in Turkey.

Works by younger professional artists who have taken that chance are particularly good.

Although influences of Lhote, Leger, La Fresnaye and Gromaire have been felt, for some time, in modern Turkish painting, their influences were rarely accompanied, as in the case of this Exhibiton, with attempts for intricate compositions in which crowds of people are represented in action.

Among the more succesful examples of such works are, Cafer Sadık Yazdıran’s “Gray Wolves”, which impresses one as a modern interpretation of Paolo Uccllo’s “the Rout of San Romano”; Melahat Ekinci’s “the Slaying of the Dragon”, in which the artist achieves that rare combination of abstractionism and human expression; İhsan Şurdum’s “the Turkish Peasant at the War of Liberation”; Nihat Akyuvak’e “Fighting in Korea”; and paintings by Maide Arel, Şemseddin Arel, and Şadan Bezeniş.

Also included in the Exhibition are over 90 paintings and drawings by the late Hayri Çizel, whose works depicting scenes of the Balkans War, the battles on the Caucasian front, and the War of Liberation, are very fine examples of illustration in the traditional manner. He displays a strong sense of composition which is seldom found among the older generation of Turkish painters. 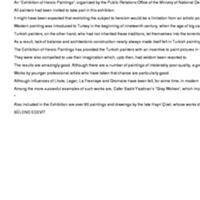