In starting this series on Turkish poets, I cannot hope for more than giving a glimpse of what I consider the best in Turkish poetry. After all, appreciation of poetry cannot easily be based on subjective values, and it is hard to avoid being partial to one's own tastes in making a selection of poems. The fact that it would be beyond my authority to attempt introducing the English-speaking reader to the history of Turkish literature will, I hope, be regarded as a valid excuse for any serious ommissions that I may make on the way.

Most of the young poets of our day regard the thirteenth century folk poet Yunus Emre as the greatest master of Turkish poetry. In general, they consider his work superior to the whole of the “Divan” poetry,-poetry of the court circles during the Ottoman rule.

In the eyes of the peasants of Anatolia, Yunus Emre is a saint.

He is an earthly mystic. His earthliness distinguishes him from the mystics of the Orient and brings him closer to the humanism of Ancient Greece.

He may yet prove to be the secret tie between the people of Anatolia and the source of Western thought.

Although he regards death as the final stage in merging With God, which, for him, as for all mystics, is the ultimate and noblest aim, he cannot bring himself to despise the life on the earth. He loves the earth, and never ceases to grieve the rule that one has to depart it, even if to attain oneness with God. The farewell to the earth of this black sheep-among-the-mystics is full of human tenderness 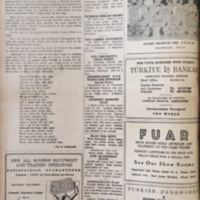 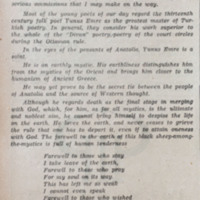