THIS IS THE FIRST ARTICLE OF OUR NEW ART EDITOR, BÜLENT ECEVİT. WE ARE HAPPY TO ASSURE THE COLLABORATION OF Mr. ECEVİT WHO IS WELL KNOWN IN TURKISH ARTISTIC AND PRESS CIRCLES. HE WILL WRITE REGULARLY TO T. A. NEWS

“Gölgeler” (the shadows), a play in three acts, by well-known poet Ahmet Muhip Dranas, has had its first night in Ankara on Saturday, November 22, at the Büyük Tiyatro, performed by artists of the State Theatre. The play had previously been staged in İstanbul, some years ago.

“The Shadows” is a tragedy, in which the protagonist and the antagonist are, in a sense, the same person, -although the hero, “the father”, seems to think that all the people around him are antagonists. The shadows come into the play in the form of those same people, not as they really are, but rather as imagined by the hero, -an ageing man, too much conscious of the fact that he is ageing.

Although the plot covers a very one can inter, from certain comments, that he has, for all his life, been a self-centered man. His unfulfilled dreams are more real to him than the actual course of his life; as a result, he can never face realities without loosing his temper and his will to live.

The people around him, often turned into mere “shadows”, are constantly forced to fight their own shadows as cast in the hero’s mind, in order to clear themselves of his misgivings and accusations. These accusations are both moral and physical. For instance, he accuses people, not sparing himself, of being lame.

It seems the hero, in his youth, was in love with a so called “Woman of the pomegranate-coloured-dress”. Whether or not she has ever been a real person, she keeps on coming back to the hero’s mind, whom she is supposed to have rejected in the prime of her youth and charm. She seems to be one of the psychological factors that prevent the hero from coming face to face with life.

The hero looses the battle against the shadows that fill his dream earthly elements as climax, anti-climax and action, the author should have faced the fact that a theatre is not a lecture room, and that even a lecture lasting three hours with no climax and anti-climax and with no humour in it, can be tedious.

The personae in the play talk and talk. They philosophize. And on what? On death, on life, oh love, on lust for money, and so forth.

As the curtain rises, you have to listen to the illiterate but impeccable butler, explaining, in a prophetic tone, the difference between a clock and human life. The doctor, who hardly talks medicine, seems to know more about the celestial powers that govern our lives than the physical side of a human being.

The personae are arttired in nineteenth century costumes, -ankle-length skirts, drooping fancy neckties, etc.. There is a portait, hanging above the fire-place, of, apparently, the woman in the pomegranate-flower-coloured dress; her comparatively modern costume (could be early twentieth century) is, curiously enough, described as out of date.

Yet, inspite of the costumes, the time is the age of cinemas, contral-heating, and 600 km. per hour airplanes.

Setting? Turkey, - where, such dresses were in fashion Turks did not wear western costumes!

The fire-place and the butler? Very English! In any case, they could not have been Turkish as Turks do not have fire-places and butlers.

The diction is extremely slow, so that you cannot, unless, of course, you fall asleep, miss a single word of all the philosophical speculations that everybody on the stage is engaged in. Sometimes, you have to wait for seconds for the next word to part with the lips of the actor.

Action is slower still. There is a long staircase, facing the audience. The people ascend it as if they Were performing some ancient religious rite,-so sombre and straight and slow.

In short, the production is a failure,-which, probably, could not help being since the play itself is a failure.

Still, there was some really good actiong inspite of all the obstacles, as in the case of the Neighbour, played by Saim Alpage, the Son, played by Nuri Altınok, the Young man (whose name happens to be “The Ceremony of Living”) played by Şeref Gürsoy, and the Doctor, played by Suat Taxer.

Others did not have much chance of putting in any good acting.

Dranas is a very good poet. One cannot help hoping that he does not sacrifice, his poetry, anymore, to politics, journalism, and to philosophical plays. 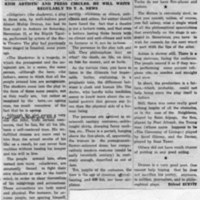