Turks do not use much fancy food for their cooking hut they know how to make fancy dishes out of simple food. The general rule is to make a separate course of each food.

Vegetables, for instance, enjoy complete independence and sovereignty in the Turkish cuisine. They are not treated as mere underlings, with no personality or dignity of their own, to such dominating characters as meat, bird or fish.

Even the simplest vegetables like beans, peas or spinach are served as separate courses, although, on special occasions, they may condescend to appear on the same plate as the meat or fowl. But in such cases the housewife or the cook sees to it that no sacrifice is made of the dignity of the accompanying vegetable— it must have been prepared as meticulously as the main food.

The respect shown to vegetables and the independence they enjoy in the Turkish cuisine, have enabled them to develop their personalities, and the ways of cooking them have been greatly refined.

These have resulted in a great variety of vegetables dishes in Turkey. A customer in a Turkish restaurant does not merely ask for eggplant, for instance, for there are at least 40 different eggplant dishes. He has to state whether he wants it as "imambayildi" (literally meaning "the priest has fainted") or "hunkarbeyendi" (meaning "the sultan has approved").

Turkish menus are full of such fancy names, which may be regarded as another sign of the imagination put into the art of cooking in Turkey.

These names sometimes go to questionable lengths. For instance, after "the sultan has approved," you may order a "woman's thigh,"—which is a delicious kind of meat loaf.

And for dessert you may order a "lady’s finger," a "beauty’s lips" or, if you are not satisfied with these a "lady’s midriff,"— all of them pastries made with flour or layers of dough.

Since each course is served as a separate dish, it is customary to have three main courses at a dinner in Turkey: first, a vegetable, rice or macaroni and then a meat, fish or bird course, to be followed by dessert or fruit.

I wish I could tell you how some of these dishes are cooked. But in Turkey a man is usually too busy eating the food his wife cooks for him to bother about learning how to cook for himself.

Do I miss Turkish food?...Well, with a few exceptions, I like American cooking. But there are several Turkish dishes whose names I would like to change to "the journalist abroad has missed,"—thus adding a new fancy title to the menu literature of the Turkish language! 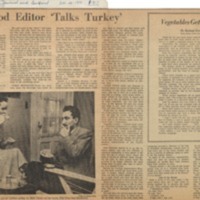 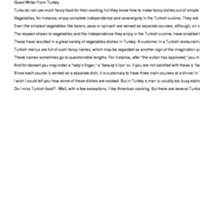