NOTHING SEEMS more phenomenal to most Americans, as far as my limited experience goes, than an acceptable stranger being a non-Christian. If a stranger appears to be a reasonably normal specimen of the human race, it is taken for granted that he is a Christian.

Several people in this country who have asked me to tell them about Christmas in Turkey were genuinely surprised, or even, perhaps, politely shocked, to learn that Turks, their close allies, were not Christians, and, therefore, did not observe Christmas.

But I feel flattered, in a way, when I am asked about Christmas in Turkey, because I regard it as a sign of my acceptance here as a normal human being.

I have even been asked to speak about "Christmas in Turkey" at a luncheon meeting here, but, after being told the bare truth, the program committee conceded that I could speak about "anything," if not about Christmas.

But our Sunday editor does not believe in such tolerance toward non-Christians. He wouldn't have me write about "anything,"—not at Christmas time. He insisted that I write about Christmas!

That is the spirit in journalism—one must be topical at all costs!

So, here I am, writing about Christmas in a country where Christmas is not observed.

STRANGE, however, that Christmas should not be observed in Turkey, for, after all, Turkey is the country where Santa Claus was born and first started giving out gifts.

That, again, sounds incredible to many people here, because Santa Claus reminds them of snow whereas Turkey does not.

Having reasoned thus about the geographic and climatic conditions of Turkey, they put two and two together and ask, "How then, could Santa Claus have been born in your country?"

But, as far as facts versus reasoning goes, Turkey is way up in the north. It has a much colder climate than North Carolina. And a great part of it is covered with snow during the winter months.

What's more, there is nothing exotic about Turkey.

So, putting two and two together, there is no reason why Santa Claus could not have been born in Turkey!

A too careful examination of the facts relating to the birthplace of Santa Claus may still indicate some discrepancy, however.

For Santa Claus was, indeed, born in a comparatively warmer part of Turkey. But then, who could have prevented the old man from traveling north in the month of December if he enjoyed plenty of snow, as he apparently did?

To sum up the facts, Turks, whether one likes it or not, are not Christians...Turkey, whether one believes it or not, has plenty of snow in winter...And Santa Claus (St. Nicholas), no matter how incredible it sounds, was born in Turkey (1,600 years ago in the province of Antalya).

So, a Merry Christmas to you all, from the country of Santa Claus, where he is still regarded as a saint and loved by the children, for, in his acts of generosity, that kind-hearted man did not discriminate between religions and nations.

Therefore, although he may have been born elsewhere, no country is more deserving than America today to be the adopted country of Santa Claus. 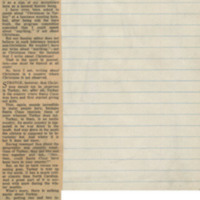 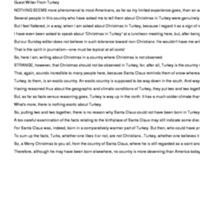