Characters of US Comic Strips Succeed in Being World Citizens

The world is no place for a world citizen. It is divided up by guarded frontiers, by national or racial vanities, by pride in traditions, customs or religious differences.

The world citizen of our day exists only in print and is born out of the imagination of great comic strip artists. He is the only one who can travel across the frontiers without a passport and can be naturalized almost in any part of the world without having to obtain an identitiy card with his nationality stamped on it.

Of course not every cartoon strip character has these privileges. He must be up to certain standards — he must be so universal as to feel at home almost anywhere in the World.

Among the comic strip characters that I know none can qualify to world citizenship more than the people of Dogpatch and the outsiders who happen to have dealings with them. They would fit into the pattern of life almost in any country in the world and live there as happily or miserably as they do in Dogpatch, U.S.A.

In Turkey, the people of Dogpatch and their friends and foes are settled at the bottom of page 3 of an Istanbul daily.

There were, apparently, several others who felt the same way. A long line would form behind my desk as soon I got got out my copy of that daily. "Excuse me please," they would say, one by one, and snatch the newspaper from my hands, read Li'l Abner, smile, say "thank you," and go away, leaving the newspaper on the desk for the next fellow in the line to pick up. It was almost a ritual repeated every day, as regularly as our drilling exercises.

Of course, all the people appearing in Al Capp's wonderful village have Turkish names in Turkey. A friend of mine translates the stories for his paper and he tries to find the right name for the right character. I can grant that he often succeeds, though I am not inclined to say "always," because once he named a young stranger after me, as a compliment, and at the end of the story that seemingly innocent young man turned out to be a criminal. I still don't know if my friend knew how the story was going to end.

Among other world citizens of the comic strip world are Dagwood and his family. They live on page 6 of another Istanbul daily. Feeling like a friend of the family, I have tried not to miss a single episode in the daily life of that happily married couple. I was terribly disappointed to find out, upon my arrival here, that those delicious sandwiches that Dagwood made for himself after midnight were not part of the life in this country. But I was glad to learn that a certain type of sandwich called "Dagwood" was now gaining in popularity in America, just as certain schools had started a "Sadie Hawkins Day."

Dagwoods, Li'l Abners, Beetle Baileys and others like them can, I suppose, feel at home in almost any part of the world and make friends with almost any people, even though some of their habits and customs may not conform to the local conditions. For, in spite of all the apparent non-conformities, they share the hardships and aspirations, the happiness and pettiness of mankind all over the world.

There is no reason why their friends in various parts of the world should not be entitled to the same privileges and become as much citizens of the world as they are. But men are funny—funnier than the funnies. They will keep on depriving themselves of the privileges that they are only too willing to grant to the creatures of their own imagination. 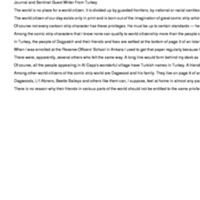