What to Do About the Middle East?

THE Middle East continues to be a major sore spot in the defense setup of the free world. This area which contains the rich oil deposits (53.46 per cent of the world's oil reserves) that are essential to the West, is unstable and open to aggression or infiltration from the north, except for the bulwark provided by Turkey.

The Arab states in general, are unfriendly towards the western powers and Turkey, and they are decidedly hostile to Israel.

The U.S. government — faced with a choice of turning a cold shoulder to the Arab people at the risk of evoking a more unfriendly attitude, or supplying arms unconditionally to a group of nations with unstable and mostly corrupt administrations, unreliable policies and dubious motives — seems to have decided finally on the latter course. Its only advantage over the former seems that, instead of leading to an impasse, it will probably lead somewhere, be it for better or for worse.

A recent Ballentine Book, Security in the Middle East, treats the problem of the Middle East in a well-informed and comprehensive way and arrives at the conclusion that arming the Arab countries under the existing conditions will not help solve but only aggravate the problems of the area and turn it into an even more dangerous trouble spot for the West.

WRITTEN by a group of clergymen and scholars holding responsible positions, the book is in the form of an appeal to the President of the United States, backed up with detailed and well-classified data on the various aspects of the Middle East as a geographical and political entity, as well as on the individual Arab states in this area and Israel.

On the strength of the data in the book, the authors claim that: (1) the current problems of the Middle East are not military, but economic, social and political, and (2) the arms to be supplied to the Arab states are going to be used either against Israel or to suppress internal upheavals against corrupt administrations.

This last action, they say, would add to the misery of the people, thus spreading greater discontent among them and greater enmity towards the Western powers, so that, even if the West achieves a military alliance with some of the Arab states, the alliance would be ineffective because the people themselves would not be loyal and cooperative.

They stress that the United States should lead the way toward a program of economic and social development in this area. They suggest that the U.S. sponsor a Regional Development Board for the Middle East under the auspices of the U.N., to plan and initiate the development of the water, land and mineral resources of the Arab states and Israel, advancing 70 per cent of the funds required ($500 million for an initial period of 6 years), and invite the Arab countries receiving oil royalties to make a fair contribution.

However, this seemingly realistic plan loses some of its appeal when the authors go on to stress that the board should not come into existence before the Palestine war is settled and the Arabs agree to settle Arab countries.

With the help of the background information contained in the book, the authors themselves convince the reader, even if unintentionally, that such a prerequisite would amount to asking for the impossible. Indeed, the reader would be inclined to think that a political settlement in the area should not be the prerequisite but the aim of such an economic and social development plan as suggested by the authors.

THE authors sound equally unrealistic when they express disappointment with the Arabs' ingratitude for services rendered by the West—such as securing their "freedom from Ottoman tutelage, independence as states," and the "elevation of their leaders to positions of diplomatic recognition." Because, in several passages, the authors go out of their way to convince the reader that those very "leaders" supported by the West are to blame for all the misery that the Arab peoples have been living in since they were "freed" from Ottoman "tutelage" and given their "independence as states."

And in supplying background information on the history of the area the authors remain too faithful to the facts to have this information support their own views about the independence of the Arab countries. After saying that Iraq's independence from the Ottoman Empire was won after three years of actual warfare in Iraqi territory by the British against the Turks, they add that during the fighting "no use was made of Arab forces, who did not volunteer their services." This factual remark is bound to arouse some doubts as to the reasonableness of expecting a people's gratitude for a cause achieved for them against their own wish.

It is the irony of history that the same powers which had done all they could to end the Turkish rule in the Middle East before World War I, should try to induce Turkey, after World War II, to take over the leadership in this area.

They even went so far as to refuse her admittance to the Council of Europe and the North Atlantic Treaty Organization for several years on the grounds that her membership in these Western political and military organizations might add to Turkey's unwillingness to tie her fate to that of an area where the vital interests of Great Britain had been invested ever since that area had been freed from "Ottoman tutelage."

The views of the authors on the question of Israel-Arab tension may best be summed up in the following quotation from the book:

"The existence of Israel has not created the economic problems of the Middle East, nor would its destruction resolve them.

"In their intransigence, the Arab governments have been strengthened by their belief that, fearful of losing access to military bases in the Middle East or jeopardizing oil concessions, no Western power would press the issue of peace."

Even for those who might not agree with all the views held by the authors, Security and the Middle East should be of great value as an informative handbook on the Middle East.

For, under various headings, it gives concise information on: (1) the armed strength and strategical aspects of individual countries, (2) the oil reserves and royalties, (3) the general state of communications and port facilities, (4) the rifts between the Arab states themselves, (5) the part that each Arab country played in World War II, (6) the social, economic and political conditions, (7) current developments and possibilities for further developments, (8) minority and refugee problems and (9) the appeal of communism in that area. 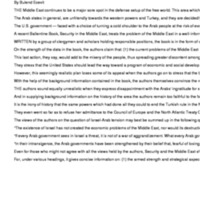