Poetry in Turkey - A Nations Most Popular Art

POETRY is, perhaps, the most popular art in Turkey. In fact, it might even be described as too popular, because this popularity tempts some poets to conform with the average taste. However, if art has some social function and must therefore be communicated, one should not complain of its popularity, and the artist who goes out of his way to conform with the average taste would only have himself to blame.

The popularity of poetry in Turkey goes far back into history. During a great part of the Ottoman period poetry remained almost the only form of literary writing.

That was natural within the framework of Ottoman culture which was essentially Oriental, because the Oriental mind does not, in general, go in for rational thinking. It is irrational to a great extent and relies more on vision and intuition than on reasoning. And poetry, of course, is the most suitable medium of literary expression for intuitive thinking.

Turkish folk literature also is mainly in verse. But I think this is the same all over the world since folk literature in general is the literature of the illiterate, so that it has to be preserved in memory rather than in writing, and verse of course is easier to memorize than prose.

Public interest in poetry did not decrease after prose literature began to develop in Turkey.

There are a great number of literary magazines which one can get on the newsstands, and they all give large space to poetry.

POETRY soirees are frequently held both in Ankara and Istanbul, in which poets and stage artists take part, and they draw large audiences even though there usually is an admission charge.

Apart from these soirees there are "poetry exhibitions."

The first of these exhibitions was held a few years ago by a young poet who had started as a pilot and ended up as a screen star. An artist illustrated his poems, and they were exhibited at a gallery in Istanbul.

The poet hung a cord at the entrance and never removed it during the exhibition. All visitors had to pass under that cord. When asked about the reason, he explained that he had thought of it as a means for making the public bow down before poetry. Although his work was not outstanding, thousands of visitors did, in fact, "bow down" before it.

Such exhibitions, which bring the painter and the poet closer together, have been in fashion in Turkey ever since. In certain hours of the day the poets whose works are exhibited come to the gallery and sign their books for their fans.

All this interest in poetry, however, does not make the poet's lot any better than it is in other countries. In fact, a poet in Turkey can hardly make money on his poetry.

Actually modern Turkish poetry was born out of a rejection of the past. Like many aspects of contemporary life in Turkey, it is a product of the reforms initiated by the late Kemal Ataturk after he had founded the Republic in 1923.

The radical changes in the social life which these reforms involved eliminated the possibility of a compromise with cultural traditions.

The imagery of the Ottoman poets belonged to a world so different from the world of modern Turkey that they would evoke no associations in the minds of the younger generations.

Added to this was the fact that the prosody of Ottoman poetry had fallen into disuse as a result of the language reform which purged Turkish of a great many foreign words. That prosody suited the Ottoman language, which consisted of Arabic and Persian words in almost a greater part than Turkish, but could not be applied to many words of Turkish origin without distorting them.

Ottoman poetry exerted a negative influence, however, on modern Turkish poetry through the various reactions that it evoked among the younger poets.

There was a reaction against the elaborate poetic diction of the Ottoman poets. The reaction stimulated the simplification of diction. There soon came a time when poets of the younger generation shunned any word which had not become part of the spoken language.

There was a reaction against the excessive use of metaphors and adjectives in Ottoman poetry, which had, in time, stagnated into cliches. This feeling caused several poets to avoid adjectives and metaphors altogether.

This, along with the simplification of the diction, resulted in a clear-cut and direct poetry.

Then there was a reaction against the exploitation of a limited number of poetic topics for centuries. This resulted in the writers’ regarding any topic as suitable for poetry, and consequently realism became the motto for most of them.

So, modern Turkish poetry became clear-cut in expression, direct in method, and realistic in outlook.

WITHOUT the security and the ties of a tradition, the poet in Turkey is restless and in constant search for new modes of expression.

Since Ottoman poetry has lost all its appeal during recent years, reaction against the old does not play as important a part now as it used to. Those who have carried the banner of the anti-traditional movement have won the battle and cleared the way for less prejudiced experiments.

This anti-traditional movement was headed by Orhan Veli, who died in 1950 at the age of 36.

He purged Turkish poetry of all the traces of Ottoman influence, and carried simplicity of diction, directness and realism to extremes. His work still has a great influence on many poets. He was a controversial poet during his lifetime, but the great funeral given him by the people was visible proof that he had been able to change the taste for poetry in Turkey.

On the other side of the scale is the 43-year-old poet, Fazil Husnu Daglarca.

His influence on modern Turkish poetry has been increasing lately. As against the simplicity of diction and the directness of Orhan Veli, he often uses a very complex syntax, at times recalling E. E. Cummings, and has introduced a modern brand of mysticism to Turkish poetry.

He is an amazingly prolific poet (he says he cannot go to bed without writing a poem), and has that rare capacity for treating everyday matters on a mystical level. He was an army officer until he retired recently as a major.

Two poems from his "Legend of Chakir" are quoted here. This legend, consisting of separate lyrics, seems to be the poet's search for truth and for the golden rule to be derived from truth for the right kind of living.

TURKISH folk poetry had been entirely ignored during the Ottoman period. But now the bards of Anatolia exert a great influence on contemporary Turkish poets.

Their work is regarded as of much higher quality than the so-called court poetry of the Ottoman period. They used as pure a Turkish as could be wished for even at a time when the Ottoman-Turkish had changed out of recognition under the influence of Arabic and Persian. Their metaphors were less ornamental than those of the court poets and usually served to convey mystical experience. The range of topics that they handled was unlimited.

The 13th Century bard Yunus Emre is regarded as one of the greatest of the Turkish folk poets. He is an earthy mystic with a delicate sense of humor. His earthiness distinguishes him from the mystics of the Orient and brings him closer to the humanism of ancient Greece.

Although he regards death as the final stage in merging with God, which for him, as for all mystics, is the ultimate aim, he cannot bring himself to despise the earthly life and never ceases to grieve that one must depart it in order to attain complete union with God. This can be clearly seen in the poem quoted from him here.

Bards can still be heard in Anatolia. They travel in the rural areas and set their verses to tunes on a simple string instrument. The peasants greatly revere them.

During the last three decades, folklore organizations have been trying hard to collect the poems that have been composed by the bards of Turkey, and the material that they have been able to collect already amounts to a sizable library.

Contacts between the bards and the poets of the cities have been increasing ever since this interest in folklore started. The bards often come to the cities now and are received with as great a reverence by the city poets as they are accustomed to in their own surroundings. 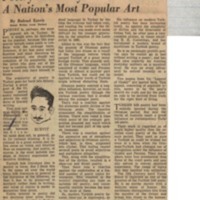 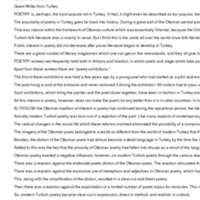