How Does it Feel to Have Red Russia for a Neighbor?

Mr. Ecevit is a Turkish newspaperman who is a guest writer on the Journal and Sentinel staff under the program sponsored by the U.S. State Department and American newspapers. Here he gives some opinions and answers a few questions on how Turkey has reacted to having Soviet Russia as a neighbor.

HOW would you feel if you read in the newspapers one morning that Russia and Canada had changed places, and that your neighbor in the north was now the Soviet Union?

Even the thought of it would probably sound like a nightmare to many Americans.

But Turkey, which borders Russia in the east and faces her across a 960-mile-long coastline (of the Black Sea) in the north, has lived with that nightmare for a long time—over 200 years.

Even a nightmare, however, ceases to be a bad dream when you've had it that long. The Soviets are supposed to have been conducting a war of nerves against Turkey for the last eight years. Yet this has continued for so long that, in the end, it has probably dulled Turkish senses, and the Turks do not seem to be feeling the pressure any more.

Of course, they still know that Russia is there, that it continues to be a menace for Turkey, that the Russians want the Straits, the eastern provinces, and perhaps the whole of Turkey, and that if there ever is another "hot" world war, Turkey would probably be among the first targets for the Red Army.

And having these things in mind, the Turks still keep nearly half a million men (out of a population of approximately 21,000,000) under arms and spend nearly half of their national budget on defense.

This is a great strain on the nation's economy, but the Turks do not regard it as too high a price to pay for their independence and security. In fact, hardly any member of Parliament raises the question of a reduction in the defense expenditure when the budget comes under discussion.

Is Russia putting pressure on Turkey, or trying to "woo" the Turks in any way?

The Russians seem to have realized at last that their war of nerves was not making Turkey nervous any more, and they have been trying new methods lately.

They have been telling the Turks that all they feel for them is friendship, that they want to be good neighbors. They even try subtler methods, such as openiug a Russian pavilion at the annual fair in Izmir, or showing a film on Russian ballet in Ankara.

The art-loving Turks who saw that film thought the Russian ballet was wonderful, but they weren't fooled into believing that the fairy-like ballerina, Ulanova, had anything to do with the policy-making at the Kremlin.

This writer met a Soviet Embassy official at a party in Ankara shortly after that film was shown. He told the diplomat he thought the Russian ballet was wonderful. But the diplomat was very cross: "You tell me here that it was wonderful," he said, "yet you have not even mentioned it in your newspaper. In fact, none of the newspapers here has mentioned it."

The writer could not but smile—the way a Russian diplomat would have smiled, perhaps, when faced with a similar admonition.

It would have been impolite, of course, to tell the diplomat that Turks had developed a kind of cautious indifference to Russia, and that anything Russian, unless it was of great importance, did not even have much news value.

Broadcasts in Turkish over Radio Moscow are hardly ever tuned in by Turkish listeners in spite of the good reception, and hours of Soviet propaganda every day literally fade into thin air.

Is there a large Communist following inside Turkey?

There are very few Communists in Turkey. There is almost no one who tries to make political capital out of “witch-hunting” the Communists. We did have that kind of people until a few years ago, but then they realized they were being somewhat quixotic in their charges against an "army of fifth columnists" which actually amounted to little more than a desolate windmill.

Why do you have so few Communists?

One reason why Turkey has few Communists is that the Turks are much too near the Russians to afford the pedantry of distinguishing a Communist from a Russian. To the average Turk, both the Russian and the Communist is a "Moskof," and "Moskof" is the Turk's traditional name for the neighbor up north who has always beeu trying to take away his land and home.

Another reason for Turkey's immunity to Communist indoctrination is that, out of a rural population of 15,000,000, a great percentage own their own land. Furthermore a law which was enacted after World War II gave every Turkish farmer the right to acquire, free of charge, enough land to make a living on, and the acreage of land that could be owned by one person was limited.

There may be a "pink" shade in this law to American eyes. But if you want a really effective vaccination against "red," there should be a small dose of "pink" in the antigen—at least that is the way most responsible politicians think in Turkey.

Is Turkey plagued with class differences, as many nations of the Middle East have been?

Of course, there are rich people, but they are too few to arouse reaction among the poor. Turkey has never been a land of big land owners and poor serfs—as most Middle Eastern countries are—and there has never been an aristocracy in Turkey, not even under the Imperial regime. This absence of disturbing social inequalities has proved to be an effectve armor against the appeal of communism.

What about the Turks' emotional makeup, and any effect the war of nerves may have had on it?

Hate is not part of the Turkish character. Throughout their history Turks have always shown themselves only too willing to forget all past enmities. Even their stiff attitude and cold indifference toward Russia today cannot be described as "hate." They would be ready to forget all enmity with Russia as soon as they are convinced of her goodwill.

But it will be hard for the Russians to convince the Turks of any good feelings. Because, through their long experiences with both the Czarist and Soviet regimes, Turks have come to realize that Russian designs on the Turkish Straits and eastern provinces are an integral part of the general pattern of their world policy.

Turks will not, therefore, be taken in by Russia's denouncement of her claims on the Straits and the eastern provinces unless she gives convincing proof of having abandoned the fundamentals of her traditional foreign policy. 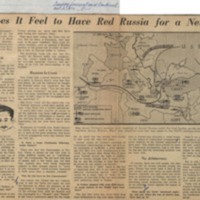 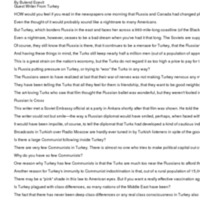