"The Consul" On The Turkish State Opera

On the Turkish State Opera

It was the good fortune of the Turkish opera stage to have come into being under the guidance of Carl Ebert, who sees the salvation of the opera in bringing the dramatic elements into relief. Therefore, a more suitable stage could not have been found for Gian-Carlo Menotti’s "the Consul” than that of Ankara, where acting has never been looked down upon as mere accessory to singing. In performing “the Consul”, which is, perhaps, more of a work of theatre than opera, great skill in acting is required.

Its theme somewhat lends itself to being interpreted as a satyr on bureaucracy, or as the struggle of the individual against supression. Yet, none of these interpretations could explain the innate power of the theme. It is too serious and tragical to be a mere satyr, and, on the other hand, it does not attempt at analysing the struggle of the individual against supression as, for instance, Sartre would have done in similar circumstances.

There must be more to "the Consul"s theme than these two explanations, and I think we come closer to the point if we regard it as a down-to-earth Kafka. Then, the satyr on bureaucracy can be taken as on the same level of symbolism as the nightmarish bureaucratic entanglements in Kafka’s “the Castle”. The Consul, himself, who is never seen on the stage, is as unverifiable as the Governor in “the Castle”. (“Is there someone behind this door?” the exasperated Mrs. Sorel asks.)

The plot can be roughly summarized as the story of a family pestered by the police since the husband is considered an accomplice in some sort of treason. He attempts to cross the border, and his wife, in trying to secure a visa to the same land of freedom gets lost in the endless web of red tape. In the mean time, both her child an mother die. On the day her husband returns and is arrested, while leaving the consulate, she commits suicide before she had time to learn of his return and arrest.

Two scenes alternate throughout the play: The home of the Sorel family, and the consulate of the country in which freedom is supposed to abound.

At home, everyone is an individual, enjoying a private world with private troubles, where the Consul never has time to spare for you, you cease to be an individual with a private world. There, “your name is a number, your story a case...” There, you have to fill in endless forms, comply with all sorts of formalities, - all in the hope of reaching that land of freedom.

“On God’s earth man is a stranger
With no right to choose his fate,"
(Act II-Scene 2)

“....open are the frontiers of death,
No papers are required of passengers."
(Act III-Scene 2)

Menotti, as both the composer and the librettist, seems to have been biassed in favour of the libretto; the music, inspite of its highquality, is little more than the background music of a film, increasing the dramatic effects, and giving the words a great power of expression.

In think it can safely be claimed that the opera has at last gained its chance of survival, through Menotti’s modern conception of this outmoded form of stage art.

Ayhan Aydan, as Magda Sorel, was at her best. She has shown great power of interpretation in rendering the helplessness of human beings before the intricate mechanism referred to as fate, and which may manifest itself through various media, including red tape.

All members of the cast had, evin in moments of intense feeling, the right amount of that detached look, required to strees the symbolic value of the theme. 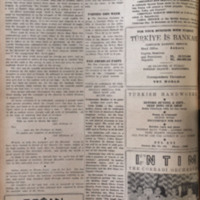 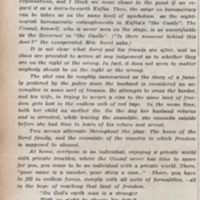 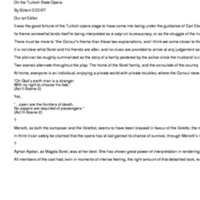